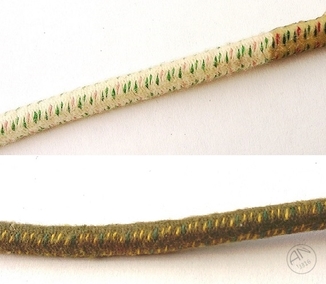 Top: 1st Quarter 1941 Bottom: OD Model, 2nd Quarter 1944
Pack opening elastics (POE) are elastic cords that draw back the container flaps when the ripcord is pulled.  The bungee consisted of continuous natural rubber strands encapsulated by a braided cotton cover. Hooks sewn to each end facilitated attachment to a corresponding eyelet on the pack tray.  Camouflage elastics,  made with an olive drab cover  and blackened hooks, were phased into use in late 1943. After installation on the pack tray, the hooks were to be clinched down with pliers to prevent the pointed end from wearing a hole through the canvas pack.
POE's were replaced by pack opening bands (POB)  consisting of a series of nylon covered springs. Designed by Edward Neff in 1944, they alleviated the rapid degradation issues of rubber and remained flexible in extremely low temperatures. They were introduced to troop reserves parachutes in 1948 (T-7A).

Due to the rapid aging of the rubber, the elastics were replaced after six months of service or when degradation was apparent, whichever came first. The elastic was required to stretch to 100% of its original length to remain in service. Because of its relatively short shelf life, the government required a dating code.
Three stripes of same color (predominant color) in the braided cover indicate the year. The cycle was repeated in succeeding years.


A single colored thread (stripe) designates the quarter of the year