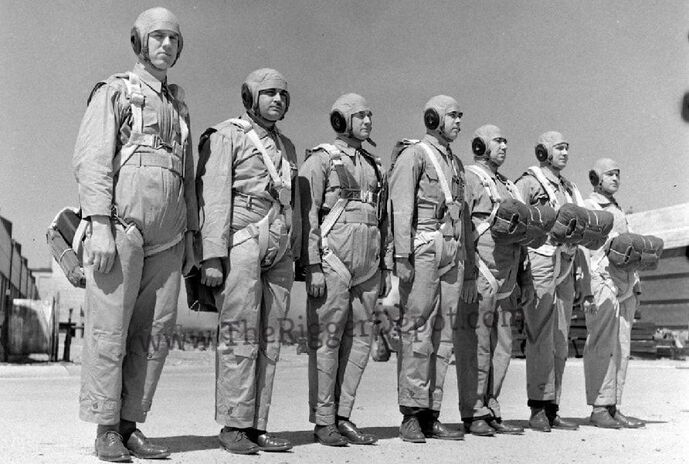 "What They Wore" - AAF Parachutes

Not sure what parachute is correct? Don't sweat it, use the charts and graphs below and you'll be an expert in no time!  (Use it as a general guide, not a rigid rule)

1)   Use the chart below to pick the correct category of parachute
2)  Then, use the following two graphs to pick the specific model
​​3)  The last few paragraphs tell  more about the study and how to best use it

Notes: If only a single letter is shown, that means over 80% wore that parachute. If there are multiple letters, the first letter is the most common parachute and the next letter the second most common, etc.
Lack of head space in the P-38 and P-51 usually required back type parachutes. For the L-5, either type is acceptable, but limited head space often requires a back type as well. 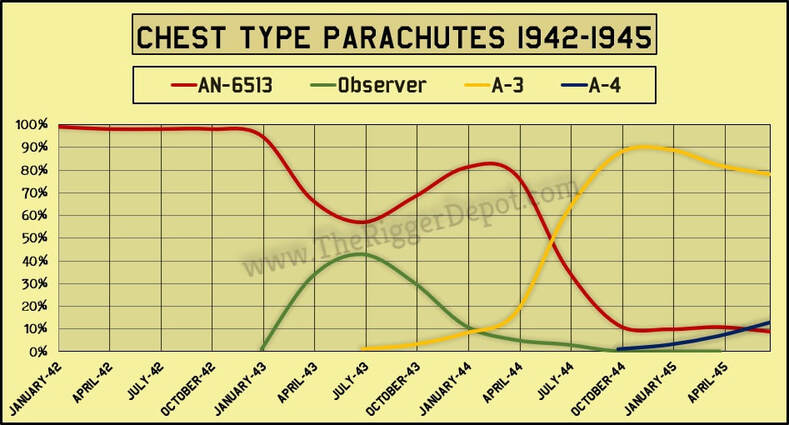 Wartime studies indicated that chest type parachutes were the most prone to malfunction. Nevertheless, the convenience factor made them the most popular and widely used parachute.  Notice the AN-6513 and A-3 harness trajectories cross each other around May 1944. That is the same month the red/yellow color coding scheme was first adopted. Coincidence? Probably not.  See also the color coding page for more information. 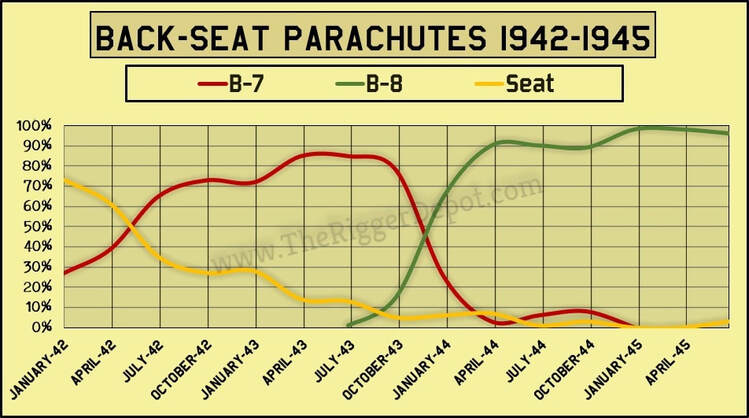 Seat parachutes were very common early war, but proved awkward in many situations. Despite a chronic shortage of back types,  back chutes were substituted in place of seat types wherever possible.
NOTE: This graph tracks the relationship between back and seat parachutes in situations were either were acceptable. For aircraft such as the P-47 where the seat parachute is only one recommended, seat types remained standard issue until the end of the war.
Tips for using this study:

The analysis pertains specifically to the ETO. Operations in the Pacific are often similar, but tend to lag behind the timeline by several months. Training operations stateside also tended to use older equipment, as new gear was in high demand in combat theaters.
Use this information as a guide, not a rigid rule. With over 1 million parachutes produced for the AAF during WWII, you are bound to find any number of oddities.  You will also find some variation between different units.

How this study was conducted:

This study draws information from several sources. Summary data for approximately 4,200 airmen was gleaned from three different 1945 parachute studies.  This information was then backed by an extensive pictorial analysis by this author of nearly 500 aircrews of 8th AF heavy bombardment groups from 1942-1945.  The "What They Wore"  chart is based on the recommendations from a 1945 study, augmented by the pictoral history analysis. The Chest Type timeline draws extensively on the pictoral analysis. The Back & Seat type graph leans more heavily on AAF documentation, as crews frequently removed these cumbersome parachutes before taking pictures.  All text and images Copyright 2020. I spent countless hours of my personal time on the study - please don't steal the information. If you found this study helpful, please let me know!

​
Still not sure what you need, or have some questions?  Click here to message us!