Testing of block pattern, 1942
Parachutes were traditionally constructed with undyed materials for fear that various additives would weaken the fabric. However, the question of camouflaged parachutes was sparked in 1942 when it was learned that the enemy targeted pilots vulnerably suspended in their parachutes after bailing out. The idea was that a camouflaged parachute would delay perception from higher altitude enemy aircraft looking earthward. A similar question had been posed by the Airborne Command for paratroop equipment and an investigation was commenced.

Testing indicated that when viewed from the ground, no type of camouflage could mask the descending parachutes. However, when viewed from above, a printed foliage pattern both bended into the landscape below and provided enhanced protection from enemy ground forces in the vicinity.

Ultimately four styles of camouflaged canopies were tested; a solid olive drab color, a solid sand shade, a block pattern, and a foliage pattern.  Although AAF policy for escape parachutes remained 100% white, the Airborne Command indicated in November 1942 its desire to procure parachutes on a basis of 50% white, 50% camouflage pending further tests. 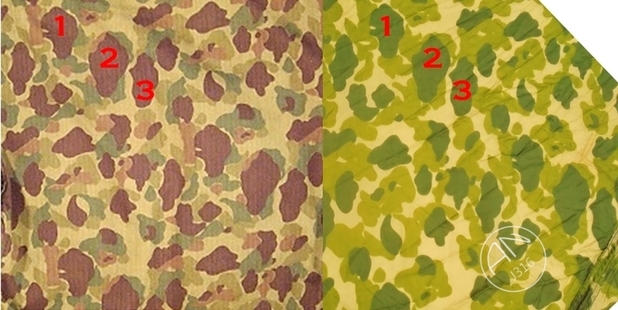 Note: The dark brown of the HBT pattern corresponds to the dark green of the parachute camouflage.

The other shades of the HBT pattern are lumped together to form the mid-OD shapes on the parachute pattern.
The camouflage pattern soldiered on for nearly a decade until it was phased out during the Korean War. At that time, the general trend was away from specialized camouflage patterns and towards a solid OD color applied to all equipment. This would save approximately $4 per parachute canopy. The utility of such a pattern also came into question. The primary benefit of the foliage pattern over a solid OD pattern was in the bushy or forested terrain specifically avoided for parachute drop zones. Furthermore, colorful cargo parachutes accompanying the troops clearly demarcated the DZ regardless of the camouflaged personnel chutes. Approval for the terminating the foliage pattern was granted in October 1952, although camouflage canopies were still being produced as late as 1954 in a ripstop pattern.

Is My Piece of Camo From WWII?
Today, many of the "WWII camo parachute scarves" sold online  are in reality cut from postwar camouflage cargo parachutes. Cut through the marketing and ask yourself these 4 killer questions: