Why So Many Seat Parachutes? 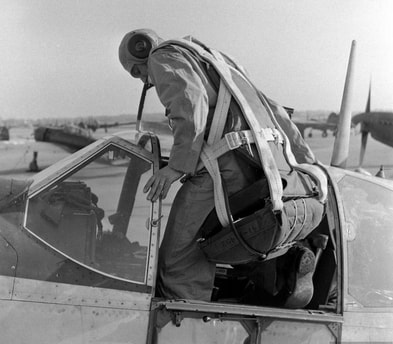 The classic Seat Parachute, Model AN-6510
​​          Despite the re-armament program already begun before the war, the US military was still woefully unprepared when the hammer fell at Pearl Harbor on December 7, 1941. As with many other war materials, massive contracts were let for parachutes in the first six months of the war in 1942. Because the seat parachute was the predominant type in service at the outbreak of war, it received the majority of the new procurement. In 1942 alone, roughly 390,000 seat parachutes were on order, and when production ceased in late-1943, over 430,000 seat types had been manufactured.

The seat parachute was ideally suited for fighter pilots, but not for aircrew who required freedom to move, such as on large bomber aircraft.  Here, the improved designs of the newest chest and back type parachutes quickly rendered the seat type obsolete. As soon as chest and back types became available, the old seat types would be exchanged and returned to stock. Consequently, when production of seat parachutes ceased in late 1943, the surplus stocks lasted to the end of the war, and indeed today are still the most commonly found parachutes. Already by July 1943, AAF stocks boasted an excess stock of 104,478 seat parachutes assemblies.

However, as the calendar flipped to 1944, a further supply problem quickly became apparent, one that would have major ramifications on these surplus stocks. Although the desire for new style quick release parachutes was first voiced in 1942, by January 16, 1944, it became quite urgent. A cable from the ETO stated that “Eighth Air Force combat personnel [have] substantially refused henceforth to wear any type of parachute not equipped with a quick release box.” Despite skepticism stateside, a quick release harness was developed at the request of the 8th Air Force and existing contracts changed to the new pattern. The first of the quick release type was received in July, with large production quantities scheduled for delivery in August and September.

Despite the long anticipation, the quick release harnesses were rejected almost as soon as they were received in the ETO. “The A-4 and B-9's with the quick release harnesses were designed primarily at the request of this Theatre, however, after recent tests were conducted parachutes were declared unsatisfactory by the Eighth Air Force.” Occasionally the boxes would jam up and trap the wearer, some froze at high altitude, and there was fear of injury from the harness layout. Thus, “The Eighth Air Force does not approve of the use of parachutes equipped with quick release harnesses, and desires to be furnished with Types A-3 and B-8.” However, the supply system had made herculean efforts and taken emergency measures to change harnesses over to the quick release pattern, and it would be nearly impossible to revert back for quite some time. With the desired harness model out of production, and the new replacement unacceptable,  how could this supply dilemma be solved?
​
It was in this tumultuous supply problem of landfall equipment deficits at the end of 1944 that eyes turned back toward the piles of unused seat parachutes. Although the seat pack configuration was not acceptable, it utilized the desired 3-point harness used in the A-3 and B-8 parachutes. Likewise, the seat pack tray could be removed and modified into something quite similar to a QAC chest pack. By the end of January 1945, an extensive program of modification and retrofitting was accomplished in the ETO. This was restated in February 24, 1945, “Since procurement of the A-3 and B-8 types have been discontinued, a program to convert excess seat type parachutes to Types A-3 and B-8 has been set up.”

This decision solved three problems plaguing the supply channels:
1) Alleviate the shortage of chest and back type parachutes
2)  Allow the 8th AF to switch back to their preferred 3-point harnesses,
3)  Clear out the existing stocks of seat types that were occupying storage space.